The Quran and the Jews 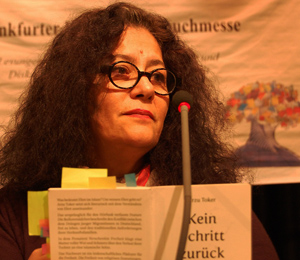 Since my childhood I constantly heard "Jews and pigs are the greatest pests of humanity". A Turkish proverb says: "You can take a jew's life but not his money" As a grown-up in Germany I was told again and again about the brutality of Jews agains the Palestinians. I also discovered that the Jews account for the most Nobel prize winners. On my quest for an answer to the hostility against Jews in Turkey and in Islamic countries I repeatedly encountered the expulsion and massacre of Jews by Muhammad and about verses in the Quran directed against Jews. Since I believe that this is an essential background of the Israel-Palestine conflict which does not get the attention it deserves I want to tell about it. Arzu Toker works as a writer and publicist. In numerous publications she dealt critically with Islam. In 1998 she received the Turkish-Greek "Abdi Ipekci Award" for peace and understanding among nations. She translated and edited the Islam-critical work of Ilhan Arsel "Frauen sind eure Äcker" ("Women are your land"). Her last publication: Kein Schritt zurück ("Not one step back").