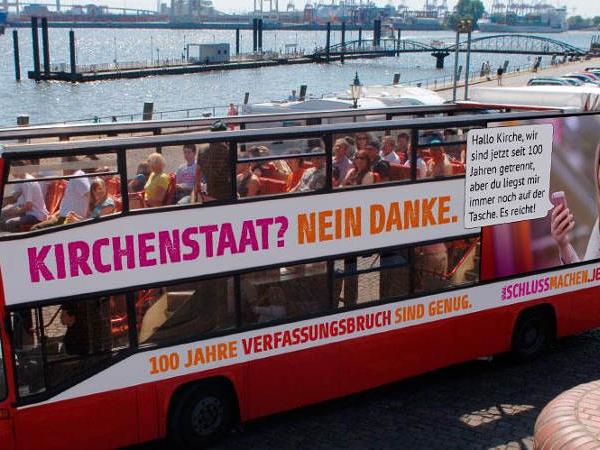 10 years ago the "Secular Bus Campaign" was under the motto "Gottlos glücklich" ("happy without god"). The message that a meaningful life needs no god has now arrived in society, but little has changed in the political environment. Therefore, the "Bus 2019 campaign", which starts in May, calls for the abolition of all state regulations that discriminate against religion-free people.

On the just-opened website of the bus campaign www.schlussmachen.jetzt it says: "The must be and end to bishop's salaries being paid from general taxes, to the churches being allowed to undermine the labor laws, to Catholic perpetrators escaping prosecution, severely ill people being denied the right to a self-determined death, and women having to undergo forced counseling if they opt for an abortion! If these and other church privileges are not abolished, then the political aspirations of the Islamic associations, which claim 'special religious rights', cannot be stopped."

The bus campaign sponsored by the Giordano Bruno Foundation (gbs) in cooperation with the International League of Non-Religious and Atheists (IBKA) and the Humanist Press Service (hpd) raises these demands against the background of the two major constitutional jubilees of this year, such as bs board spokesman Michael Schmidt-Salomon emphasizes: "100 years of the Weimar Constitution and 70 years of the Basic Law not least also mean 100 years or 70 years of constitutional breakage. Therefore, it is high time to free the politicians from their religious filter bubble and end the unconstitutional discrimination of religion-free people. "

The tour of the "Buskampaign 2019" will start on 4 May in Berlin and will travel through 25 cities, including all state capitals. In many places there will be not only press conferences and information talks on the bus, but also public evening events with prominent advocates of the ideologically neutral state. These include the former SPD top politician Ingrid Matthäus-Maier, the religion-critical authors Carsten Frerk, Philipp Möller and Michael Schmidt-Salomon and physician Kristina Hänel who was sentenced according to §219a StGB. The dates will be announced on the campaign website in the next few weeks. Thematically, it will not only be about the privileges of the religious communities (about the unconstitutional state benefits to the churches), but also about the many forms of religious tutelage that still exist in Germany, such as the ideological biased laws on abortion (§§ 218-219a StGB) or the Christian-based disregard for self-determination at the end of life (§ 217 StGB).

"The non-denominational people already represent the majority of the population in many large cities and in the foreseeable future this will apply to the whole of Germany. However, so far they are hardly organized, which is why it is easy for politicians to ignore their interests, as the SPD leadership's recent attack on secular Social Democrats and Social Democrats has shown, "says Schmidt-Salomon. "With the Bus campaign, we want to mobilize people and make it clear to the political leaders that we will not accept this unequal treatment without resistance!"