Welcome to the International League of Non-Religious and Atheists

In IBKA non-religious people united to assert universal human rights – in particluar the freedom of thought and religion – and the separation of religion and state. We advocate for individual self-determination, promote rational thinking and inform about the social role of religion.

Atheist Alliance International (AAI) demands that the Indonesian government support freedom of speech and freedom of conscience by immediately releasing Alexander Aan from custody and dropping all charges against him, pursuing the perpetrators of the physical attack against Aan and repealing the country’s oppressive anti-blasphemy legislation. 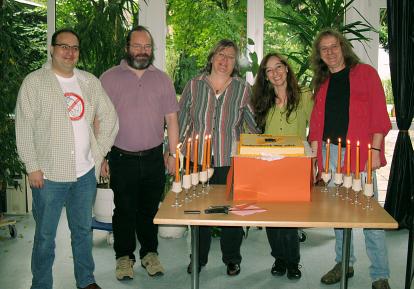 On September 6, 2008 the well-attended summer celebration of IBKA's North-Rhine Westphalia chapter took place. A descriptive report can be found at the Humanist Press Service (German).

The blogger "Kareem Amer", who criticized Egypt’s government and religious institutions, was sentenced to four years of prison for inciting hatred of Islam and insulting the president. Reporters without borders protested against the verdict. (2007-Feb-25)

India has announced to issue a postage stamp in memory of the atheist and social reformer Gora. Congratulations from IBKA to the Atheist Centre Vijayawada. (04-Sep-2002) Image of the postage stamp
Subscribe to